Bomb Cyclone Gets the Hype, But Atmospheric River Delivers the Goods as Rainy Season Gets Underway

The first storm of the season brings snow to Mt. Toro and the Sierra de Salinas

A couple of weeks ago it seemed like the rainy season might never arrive. But that all changed last Tuesday (November 26) when a much-hyped “bomb cyclone” sent a wave of rain sweeping across the state.

For the record, a bomb cyclone is simply a mid-latitude weather system that strengthens rapidly enough that it drops in pressure by 24 millibars, or more, in 24 hours. A storm that strengthens more slowly can still get just as strong.

This storm met the definition easily, as it shed 43 millibars in 24 hours, while approaching landfall near the California/Oregon border. As it came ashore, the Crescent City Airport recorded a pressure of 973.4 millibars, a record low for the state of California. Rain and snow then spread across the state, closing roads and complicating Thanksgiving travel plans.

Here in Monterey County, the highest rain totals were recorded on the southernmost coastal ridges, with Chalk Peak, above Pacific Valley, and Three Peaks, above Salmon Creek, receiving more than three inches. The central Santa Lucia Mountains got much less, with Mining Ridge and the Ventana Double Cone getting barely more than an inch and Black Cone and Pinyon Peak getting less than an inch. The northernmost hills got a bit more, with White Rock Ridge, above Garrapata logging over two inches.

By Friday, the lingering showers had largely faded away, but a new low pressure system was dropping down from the north and pulling warm, moisture-laden air from near Hawaii up toward the California coast. Meteorologists used to love calling this phenomenon a “Pineapple Express,” but in recent years it has come to be known as an “atmospheric river.” Storms of this type have historically been responsible for California’s most extreme, and prolonged, rain events.

The moisture began arriving and the rain began falling early Saturday morning and, as the river barely wavered from its focus on the central to northern Santa Lucia Mountains, the rain fell nearly continuously there for the next 60 or so hours, accompanied by winds that gusted to more than 70 mph. As the river was narrowly focused, locations to the north and south generally received much less rain.

The rain began moving off to the south and the skies finally cleared only hours ago, but more showers remain a possibility and the low that delivered the moisture is itself expected to bring another round of rain as it comes ashore to the south of us Tuesday evening. A third potent storm may arrive as early as Thursday.

As of now, the evening of Monday, December 2, Mining Ridge, as is so often the case, has received the most rain of any location in Central California with 18.31 inches for the week, 17.25 of which has fallen in the last 72 hours.

The extreme dryness that preceded this rain has prevented any dramatic runoff, but all the rivers are now flowing.

The Big Sur River rose from a flow of about 10 cubic feet per second (cfs) to peak this afternoon at around 1,200 cfs.

The Carmel River filled the ever-shrinking Los Padres Reservoir, began spilling over the dam, and sent a peak flow of around 1,100 cfs downstream – prompting the County to breach the bar at the river mouth.

The Arroyo Seco River, which drains the backside of Mining Ridge, rose from about 20 cfs, to produce the highest peak flow of any local stream, with more than 3,000 cfs.

By contrast, the Nacimiento River, which usually greatly outperforms the San Antonio in terms of flow, only managed a peak of around 860 cfs – which will be less pleasing to Salinas Valley water users. This probably reflects the fact that the Nacimiento headwaters received far less rain from the atmospheric river than the San Antonio watershed to the north.

Whether the rainy season to come will be wet or dry remains anyone’s guess, but if the storms predicted for this week bring significant additional rainfall, the streams will likely rise much faster. 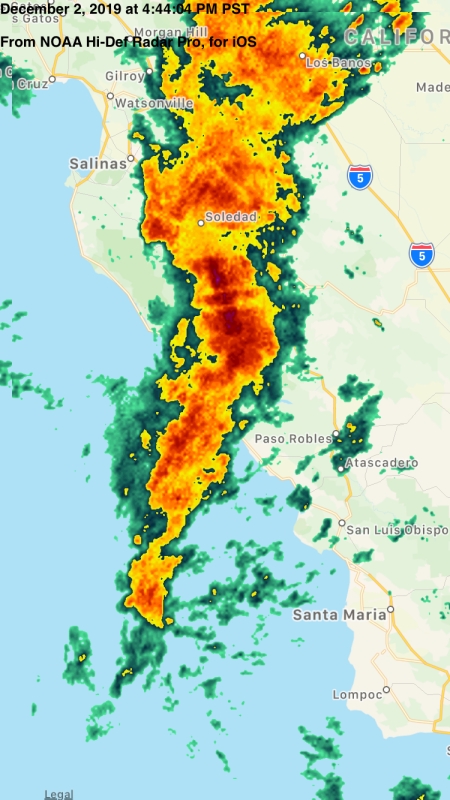 A River Runs Through It: The atmospheric river, as tightly focused as ever, begins moving off to the south this afternoon.

The ocean held the rising Carmel River at bay for awhile this morning, raising the lagoon to “action level,” but the river eventually prevailed and lagoon levels dropped.

When the Carmel and Big Sur Rivers flirted with flood stage last month, it passed largely without notice. They had not been projected to rise that high and so flood alerts weren’t issued.
END_OF_DOCUMENT_TOKEN_TO_BE_REPLACED

On Wednesday, January 16, 2019, wind gusting to over 50 mph brought down trees and knocked out power – especially on the Monterey Peninsula’s south-facing slopes.
END_OF_DOCUMENT_TOKEN_TO_BE_REPLACED

The rain is still falling out there, but it looks like our multi-day storm is beginning to wind down.
END_OF_DOCUMENT_TOKEN_TO_BE_REPLACED 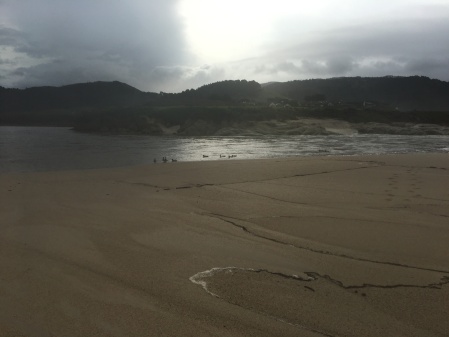 A good day for ducks at the Carmel River Lagoon

A mandatory evacuation has been ordered for all low-lying areas of Carmel Valley, as the Carmel River continues to rise toward a projected peak of 10.4 feet at the Robles del Rio gauge.

Here is the message from the Monterey County Office of Emergency Services:

A mandatory evacuation order has been given for residents who may be affected by flooding on the Carmel River.

The Carmel River is expected to hit flood stage beginning at 4 pm today and peak beginning at 8 pm tonight. Those affected are asked to leave as quickly as feasible. Areas that may be impacted by flooding include all low-lying areas adjacent to the entire stem of the river from the Los Padres Dam to Mission Fields.

The Red Cross has established an evacuation center at Carmel Middle School, 4389 Carmel Valley Road. The SPCA of Monterey County will be on hand to assist evacuees with their companion animals, please call the SPCA if you have large animals that need to be removed 831-373-2631.

Minor flood stage begins at 8.5 feet (revised down from 9 feet when minor flooding began along Paso Hondo at less than 9 feet last month). River systems are dynamic and rapidly changing during times of high water, making it impossible to predict exactly what will flood, or how deeply, at any given water level. This uncertainty is undoubtedly why such an extensive evacuation has been ordered.

5:30 pm Update: As of 5:00 pm, the Carmel River had actually gone down a little at the Robles del Rio gauge, measuring 8.06 feet (5,450 cfs), but heavy rain has begun moving into the area and, if it continues, this decline may be short-lived.

10:00 pm Update: At 8.54 feet, as of 9:45 pm, the Carmel River has now reached minor flood stage. It is flowing through Robles del Rio at about 6,300 cfs. The Hydrologic Prediction people have bumped the projected peak up to 10.8 feet. Hopefully, the river will peak below that level.

Midnight Update: As of 11:45, the river was up to 9.96 feet (9,370 cfs) at Robles del Rio. The good news is that the height of the water flowing over the spillway at Los Padres Dam appears to have leveled off, meaning the peak flow is probably passing, or has just passed, that location. Those near the river who have not evacuated should continue to carefully monitor the river and the upstream gauges.

5:30 am Update: The Carmel River peaked at around 10 feet on the Robles del Rio gauge, shortly after midnight – failing to reach the predicted 10.8 feet. As of 4:45 am it had slipped below flood stage to 8.44 feet (6,120 cfs). The peak, which has swollen to around 15,900 cfs as it has travelled downstream  is only now reaching the mouth of Carmel Valley.

Here’s what the river mouth looked like an hour ago:

Also be aware that yellow squares disappear from the map after 6 days. These are not maps of the area burned since the fire began, just maps of where heat has been detected during the past week. END_OF_DOCUMENT_TOKEN_TO_BE_REPLACED

Also be aware that yellow squares disappear from the map after 6 days. These are not maps of the area burned since the fire began, just maps of where heat has been detected during the past week. END_OF_DOCUMENT_TOKEN_TO_BE_REPLACED

The Sorry State of Water Conservation on the Monterey Peninsula

For years local officials have waived off suggestions that the Monterey Peninsula could do more to save water by falsely claiming that “residents of the Monterey Peninsula use less water per person per day than anywhere else in the state.” They’ve even gone so far as to publish fraudulent figures purporting to support this claim.

The purpose of this grandiose bragging has been to promote approval of as large and growth-inducing a new water project, whether dam or desal, as possible. That effort appears to have succeeded, but at the cost of undercutting efforts to increase water conservation. END_OF_DOCUMENT_TOKEN_TO_BE_REPLACED

Throughout the year, we’ve been posting, on a monthly basis, the average number of gallons used per person per day by residents of the Monterey Peninsula’s Cal Am service area, together with how that compares to other cities and water districts throughout the state.

Residential Water Use on the Monterey Peninsula Reaches Embarrassing Levels 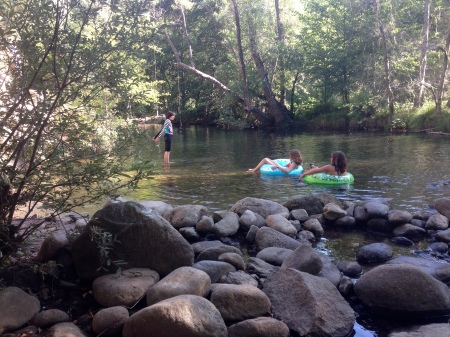 Summer on the Carmel River

It’s understandable that residents of the Monterey Peninsula, burdened by so many lavishly watered estates, would have a hard time using less water than places like San Francisco, San Diego, Inglewood and Compton, but how do we explain using almost four gallons more per person per day than a place like Burlingame; a wealthy Silicon Valley bedroom community where the median family income is $113,440, the climate is hotter and drier, and extensively landscaped properties abound?

The best performance in June was turned in by the Southern California city of Lynwood, where residents used only 35.3 gallons per person per day. Second place went to our own neighbor to the south, Cambria, where figure was 37.1. Santa Cruz was, once again, the best of the Monterey Bay area, at 42.7, and King City was, once again, the Monterey County leader, at 48.8.

Given our increasingly urgent need to impress the State Water Resources Control Board with the Peninsula’s seriousness about reducing its illegal pumping of the Carmel River, it’s too bad local officials aren’t doing more to make conservation a priority. Empty words about our water conservation leadership aren’t likely to impress a Water Board that now tracks and publishes the cold, hard facts on a month by month basis.