Just in time for Halloween comes news that the concentration of carbon dioxide in the atmosphere has reached 404.39 parts per million.

For those who think this is a normal variation, here’s a handy graphic covering the rise and fall of carbon dioxide concentrations over the past 800,000 years: 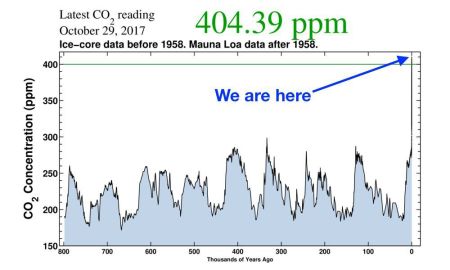 As it is painfully obvious that those who run the planet have zero interest in reducing carbon emissions by anything like the amount, and at anything like the speed, necessary to avert disaster, that line will only continue to climb toward the stratosphere and the impacts of climate change will only worsen.

While no one knows just how bad things may get, it’s worth noting that the biggest mass extinction event in earth’s history, the Permian-Triassic Extinction, which wiped out as many as 96% of marine species and 70% of terrestrial vertebrates, is thought to have been driven by runaway global warming. In that case, increased ocean acidity, caused by higher carbon dioxide concentrations, and decreased ocean oxygen levels, caused by warming, turned the oceans into hypoxic cesspools inhabited by sulfurous bacteria whose noxious gasses left the atmosphere unbreathable. Following the P-T Extinction, it took life on earth as much as 30 million years to rebuild functioning ecosystems with the kind of biodiversity we enjoy today.

We may or may not wipe out most of earth’s species this time, but our carbon emissions have already increased the acidity of the ocean surface by a whopping 30% over the past 200 years and hypoxic “dead zones” are emerging and growing larger. There is little question we are facing, and utterly failing to seriously address, the most serious crisis in history.

This month’s Northern California fires, which burned over 8,000 structures and killed at least 43 people, are a good example of an event made more likely by climate change – and also an outstanding example of how people will focus on anything else.

Lazy reporters repeat tired bromides about fire suppression resulting in unnatural accumulations of fuel – regardless of how frequently the area in question has actually burned – while less sober online commentators take for granted that the fires were deliberate government actions designed to clear away existing housing stock so that new housing designed in compliance with UN Agenda 21 can be constructed.

The main point of disagreement among these commentators is whether the fires were caused by space-based lasers (known to insiders as Directed Energy Weapons) or by some kind of electromagnetic “weather weapon” (the same one used to create and steer this year’s hurricanes). Both agree that highly flammable nano aluminum particles, distributed by “chemtrails” (which are either causing or preventing global warming, depending on who you listen to) played an important role, because “everything on the ground” is now covered with them.

And the planet continues to warm.