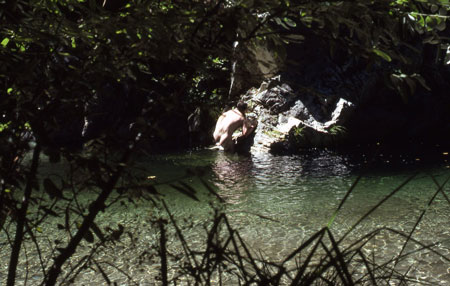 It’s amazing how much fuss people make over a small spring that’s barely warm — but thanks to this spring, Sykes Camp is far and away the most heavily used camp in the Ventana Wilderness. The camp proper is on a large, redwood shaded flat adjacent to the Pine Ridge Trail’s crossing of the Big Sur River, but various well-developed campsites extend far downstream to the site of the warm springs and beyond. Although locals tend to detest the place, it remains the only Ventana destination that most non-locals have ever heard of.

It can’t be denied that Sykes is endowed with many natural charms, yet decades of heavy use have left it pretty worn. This problem is made more acute by the fact that the steep canyon walls confine the human visitors to very narrow strips of real estate along the banks of the river — and between fire rings, tromping feet, clearings for tents, garbage dumps and human excrement, this zone takes a tremendous beating. It may be heavily forested, but don’t expect to find much firewood here!

Sykes is also noted for attracting a lot of people who don’t seem to have ever spent a night away from their televisions before, so really astonishing displays of bad judgment and outdoors ineptitude are common. Don’t be surprised if you find yourself having to help your neighbors (and you will have plenty of neighbors) perform simple tasks like lighting a stove or pitching a tent. You might consider bringing extra food for the people who will, inevitably, have managed to drop theirs in the river or in the fire. Be especially careful to bring extra food if those people might include you.

Nearly everyone gets to Sykes by heading up the Pine Ridge Trail from Big Sur. It’s actually a little less than 10 miles (as carefully measured by the Sierra Club with a wheel), but as there’s a lot of up and down, almost everyone swears it’s much further. Those unused to doing much walking (a category which includes a large percentage of Sykes visitors) often use terms like “death march” and “gruel-a-thon” to describe this journey and many a first introduction to the Wilderness and many a budding romance have been soured by a footsore trudge along this trail.

You have been warned.

One Response to Sykes Camp