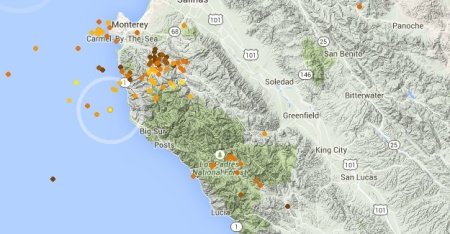 Lightningmaps.org image depicting lightning strikes detected between 6:30 and 7:30 this morning. The storm reached our area around 4:30 am and was still producing some strikes, mainly offshore, at 9:00 am.

The remnants of Hurricane Dolores, which brought intense thunderstorms to Southern California yesterday, reached the Northern Santa Lucias, Carmel Valley, and the Monterey Peninsula early this morning. While heavy rain fell in some areas, it doesn’t appear to have lasted long enough to produce significant totals. No Monterey County rain gauge seems to have received much more than a couple tenths of an inch, and most received only hundredths of an inch. END_OF_DOCUMENT_TOKEN_TO_BE_REPLACED

Monterey Peninsula graffiti may not be up to the standards of the LBC, but we can still match them in water consumption.

Residential water use in the Monterey Peninsula Cal Am service area jumped to 58.8 gallons per person per day in May. This is up from 55.8 gallons in April. The increase drops the Monterey Peninsula from 29th place on the list of the state’s most water-frugal cities and water districts, all the way down into an ignominious 48th place tie with Long Beach. How long ago now seems that glorious wet December of 2014, when Peninsula residents turned off their landscape irrigation systems and used only a little over 33 gallons per person per day; the second lowest total in the state. END_OF_DOCUMENT_TOKEN_TO_BE_REPLACED