Wildflower of the Week: Giant Trillium

Giant Trillium (Trillium chloropetalum), also known as Giant Wakerobin, is currently in bloom in the Santa Lucia Mountains. This plant is a true California native, inhabiting the coast ranges from Santa Barbara to Siskiyou, as well as the Sierra foothills. It is closely related to, but much larger than, the Western Wakerobin (Trillium ovatum) found in our coastal redwood forests.

Impossible to mistake for anything else, Giant Trillium consists of a robust stalk, rising as much as two feet above the ground, topped by the distinctive three leaves than make a trillium a trillium. The Giant Trillium’s single flower emerges directly from the branching top of the stalk and is not lifted above the leaves on a stalk of its own, as is the case with T. ovatum. 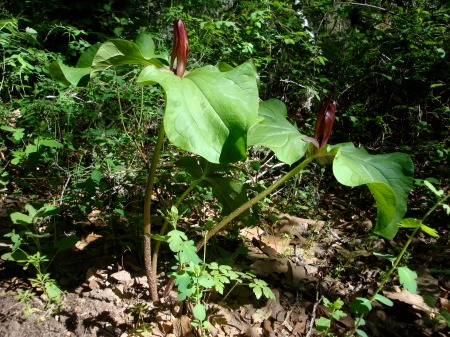