Wildflower of the Week: Dudleya

It will take a bold poacher to snag this Dudleya

If a year ago someone had said that Dudleya poaching was about to become a problem along the California Coast, it would have been difficult to believe. But in an increasingly globalized and irrational world, we should probably not be surprised when the not-so-invisible hand of a distant market suddenly reaches out to rip a random thread from the local web of life.

Dudleya poachers have been busted in Northern California several times now, and have recently been spotted stuffing their duffel bags full of looted succulents right here in our own lawless Garrapata State Park – where officially closed trails host hundreds of hikers per day and illegal campers started the most-costly-to-suppress-in-US-history Soberanes Fire.

While most Californians hearing the news about Dudleya poaching had probably never heard of Dudleya or given them more than a passing glance, Dudleyas have long had a following among xeriscaping gardeners. The limited demand has always been easily met by nurseries, where Dudleyas can be purchased at reasonable rates, under the common name Live-Forever – although not, apparently, in anything like the quantity that the market now requires.

There are about six species, and two or three subspecies, in the genus Dudleya to be found in Monterey County, as well as a couple of species in the closely related Sedum genus.

Dudleya and Sedum belong to the Crassulaceae, or Stonecrop, Family. They are beautiful, yet unassuming and easily overlooked plants that do a good job of blending in to their surroundings. They generally inhabit rocky, inhospitable spots on coastal bluffs or parched mountainsides and, as the common name implies, they are very resilient. Some species may be capable of living 100 years or more.

All this resilience against drought, salt spray and time, does not, of course, prevent Dudleya from being torn out by the roots and sold into commerce. So until the Dudleya bubble bursts, they will doubtless continue to be stripped from public and private land alike. We can only hope that the Dudleya fad fizzles soon. 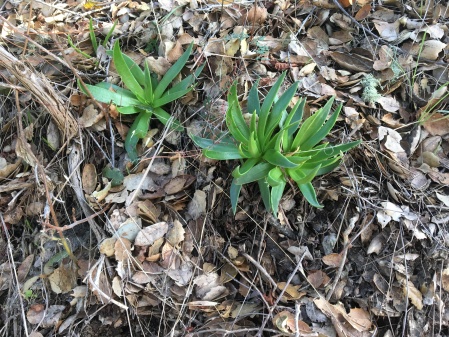 This entry was posted on Sunday, May 13th, 2018 at 9:39 pm and is filed under Big Sur, Fire, Flood & Apocalypse, Plants, Santa Lucias, Wildflowers. You can follow any responses to this entry through the RSS 2.0 feed. You can leave a response, or trackback from your own site.

3 Responses to Wildflower of the Week: Dudleya