Is a Garrapata State Park Trail Being Ceded to a Mexican Drug Cartel? 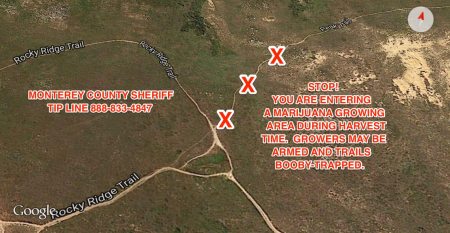 Yesterday morning, Friends of Garrapata, the volunteers who work tirelessly to keep Garrapata State Park wild and graffiti free, and its trails in usable condition, posted the above graphic to their Facebook page with the following text:

Please stay clear of the Peak Trail until October.

While environmentally destructive backcountry marijuana grows are indeed a serious problem – that could be solved overnight by legalization – and it’s certainly worth being cautious while traveling off trail in places that might be attractive to growers, this post stands out as strange for several reasons. END_OF_DOCUMENT_TOKEN_TO_BE_REPLACED 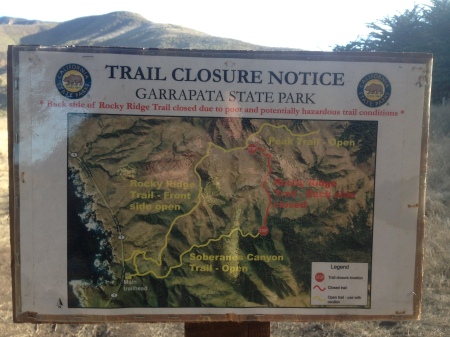 Back in the 60’s and 70’s, a well-established use trail ran up Soberanes Creek and into the redwood forest, where it petered out into a rock hop along the stream as the canyon narrowed. Somewhere around the time Garrapata State Park was founded, in 1985, the park service, or someone acting with their blessing, extended this trail further upstream and then up to meet the Rocky Ridge Trail, forming a loop. END_OF_DOCUMENT_TOKEN_TO_BE_REPLACED

It started out as an unremarkable walk at Soberanes. Just a bit warmer than usual … END_OF_DOCUMENT_TOKEN_TO_BE_REPLACED