* Backfiring operations, moving east along the Big Box line, reached Devil’s Peak around 5:00 this afternoon. Crews will spend the night on the line, then start firing again in the morning, working their way east toward Big Pines.

* The fire line to the east from Devil’s Peak is two dozer blades wide and parts of it have been pre-treated with fire retardant.

* The fire may well reach the Blue Rock Ridge line tonight or tomorrow, running uphill out of Danish Creek. If fire gets over the line they are hopeful of being able to contain it, since it will then be moving downhill.

* Completing the backfiring to Big Pines and containing the northern edge of the fire to that point could be a trigger for lifting the Palo Colorado evacuation advisory.

Maybe the fire isn’t as close to Tassajara as the previous report made it sound. The following was recently posted on the Tassajara Sitting With Fire blog:

On the advice of the experienced Fire Service people at Tassajara we have decided to evacuate everyone. While they have not yet left, we expect them at Jamesburg shortly. The fire has not yet reached Tassajara or the road.
We do not know how long Tassajara will remain empty but the current Red Flag warning does not end for a couple of days. Fire crews have told us of strong winds at the ridge. These winds together with the extreme temperatures and little or no recovery in humidity overnight produce ideal conditions for the fire to move faster than we had hoped. We appreciate that this news may cause concern but please do not call the Tassajara or Jamesburg numbers as we need the phones. We have places to stay for the current round of evacuees for a short while. The wrapping team finished their work shortly after lunch. There is now a Highway Patrol vehicle at Jamesburg preventing non-residents from driving up Tassajara Road.

It’s being reported on the, usually reliable, Wildlandfire.com, that the fire has been making a run toward Tassajara this afternoon and that people there are now evacuating.

The latest thermal imaging data indicates a very active fire. While there are no new heat detections between Pico Blanco and Mescal Ridge (are things finally winding down there?), fire is now shown very close to the fire line in the Devil’s Peak area. MODIS also places fire east of the Carmel River (in the Buckskin Flats/Hiding Camp area – deep in the wilderness and far upstream of Cachagua and Carmel Valley) and climbing the lower slopes of Miller Mountain – a route that could eventually bring it to Pine Valley. A lot of heat is also spread across the Tassajara and Church Creek watersheds, but still well upstream of the Zen Mountain Center. Fire is also spread over a wide area (from the Arroyo Seco River to the Coast Ridge) in the south, but there are no new heat detections along the coast. So are things finally winding down on Dolan Ridge?

Here’s what MODIS sees on Devil’s Peak. Holding the fire line in this area is critical to keeping the fire out of the Palo Colorado region:

MODIS depicts continued spread of the fire in the Carmel River watershed, with fire now climbing the steep slopes on the river’s east side (Please note that this is far upstream from Cachagua and Carmel Valley and well inside the Big Box fire lines):

Fire is widespread in the Tassajara watershed and surrounding areas, reaching all the way from the Black Cone Trail to Church Creek. Yet, it is still well upstream from the Zen Mountain Center: 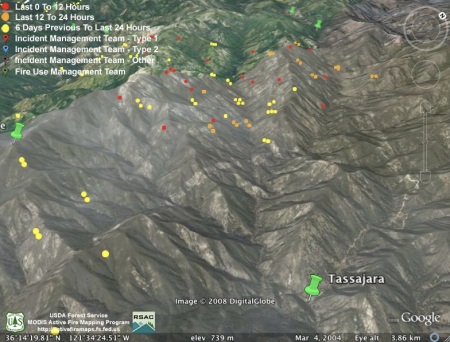 The southern end of the fire also appears to be burning over a broad area. The eastern edge appears to be more or less defined by the Arroyo Seco River:

It looks like a lot of burning is still going on between Pico Blanco and Mescal Ridge:

Fire appears to be running toward the Devil’s Peak section of fire line again:

It looks like the fire is also running uphill toward Pat Spring:

And MODIS again finds fire reaching all the way to the Carmel River (Please Note: this is in the Hiding Camp/Buckskin Flats area – far upstream from Cachagua or Carmel Valley and well within the Big Box fire lines):

It looks like a pretty good run has taken place across Church Creek:

MODIS also brings the fire down to the Arroyo Seco River near the Lost Valley Creek confluence (the Arroyo Seco/Indians Rd. can be seen crossing Hanging Valley on the right): 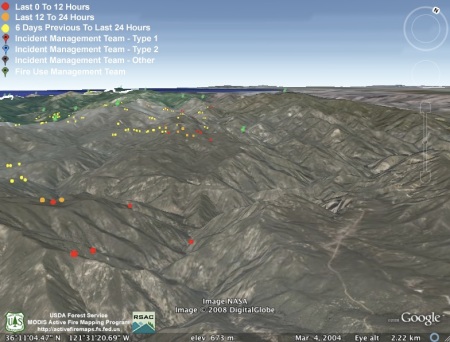 There were no new heat detections along the coast.

New thermal imaging data shows that most of the action has shifted to the fire’s eastern side. But there’s still one hot spot showing near the potentially troublesome Devil’s Peak section of the northern fire line:

There’s much more activity where the fire is descending toward the Carmel River: 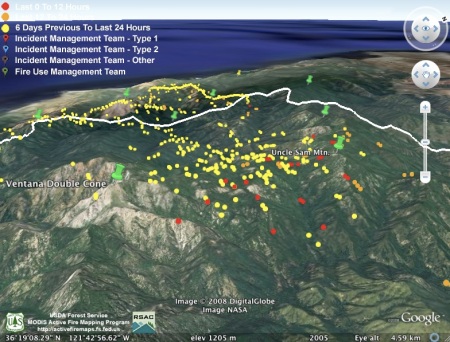 Here’s the view up Willow Creek: 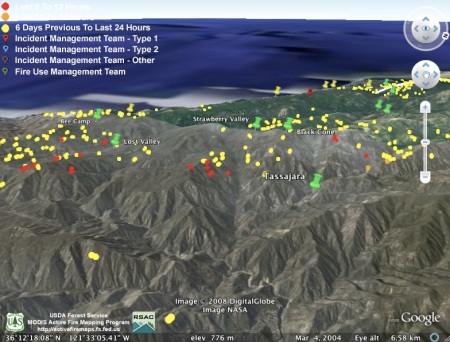 And here’s the fire’s southeastern end:

We haven’t posted since this morning because we spent the day in the fire zone. The fire was still smoldering and flaring up here and there in our little corner of Big Sur. Getting around was difficult due to fallen (and still falling) trees, but we managed to get to where we needed to go. Here’re a few photos:

The road was piled with smoldering debris

Driving north again this evening Flames were visible near the Old Coast Rd. (on the grade heading north out of the Little Sur) and fire was also burning on lower Dani Ridge.

Overnight thermal imaging detected heat only on the northern end of the fire and from the fire in Tassajara Creek. The fire continues to burn in other places, of course, but these appear to have been the most active areas. Here’s an overview of the fire’s northern section:

MODIS shows some spotting over the line in the Bixby Mountain area. It might just be an error – or it might have been another “exciting” night: 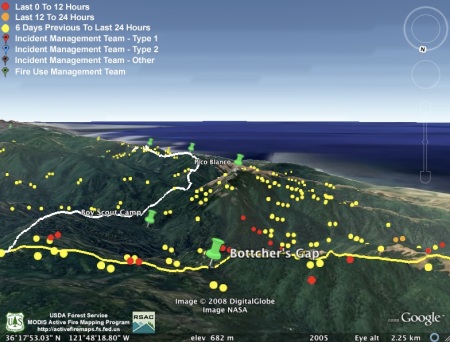 Incident Commander, Mike Dietrich, said at last night’s meeting that this section of the line (near Mt. Carmel) is a potential trouble spot. It looks like there’s significant fire just down slope from it now, so let’s hope it’s a back fire moving down the hill and not the main fire coming up:

The fire that poured over and around Uncle Sam Mountain is now descending toward Danish Creek. When it reaches the bottom, it’s only a short uphill run to the fire line on Blue Rock Ridge. The fire descending Rattlesnake Creek is making a lot of progress too:

MODIS even thinks the fire has crossed the Carmel River. Pine Valley is the green push-pin in the upper right hand corner: 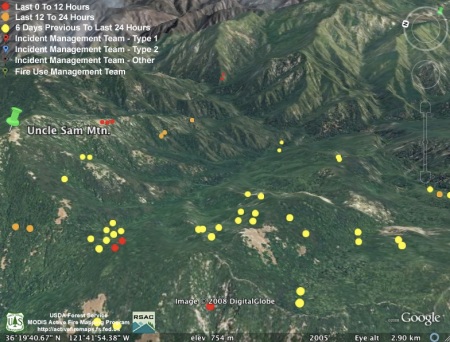 The fire along Tassajara Creek appears to have made significant progress downstream during the night. MODIS now places heat detections only a short distance upstream from the Church Creek confluence: 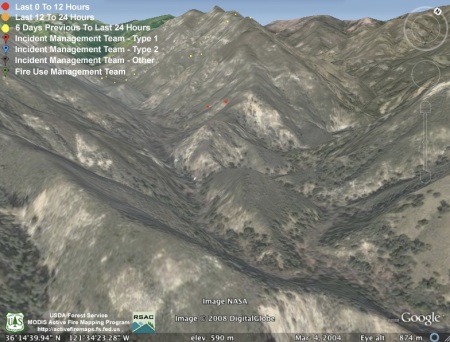