The most recent satellite pass appears to have had more success in locating the fire. It finds a good deal of heat along the South Fork Little Sur in the north and in Hot Springs Canyon in the south (is this the backfiring operation?). There are also heat detections on the Coast Ridge near Bee Camp, in the Zig Zag Creek, Tassajara Creek and North and South Fork Big Sur River watersheds. There’s even, somewhat improbably, a heat detection located on the Ventana Double Cone’s south face (which is mainly bare rock). 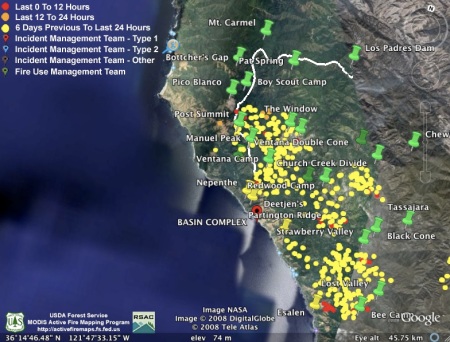 And here’s a closer look at the new heat detections on the fire’s south end. We recently saw a report of the fire moving from Hot Springs Canyon north into Buck Creek and this map is quite consistent with that: 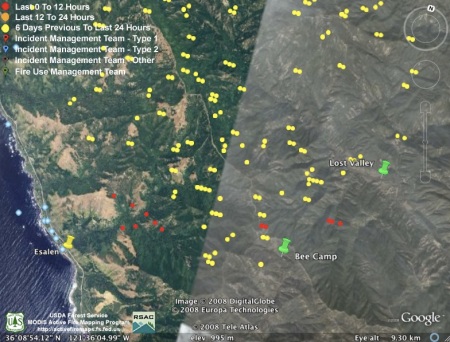 Here’s the northwest portion. There’s even a heat detection near yesterday’s hot spot on the end of the Coast Ridge (near the head of Bad Gulch): 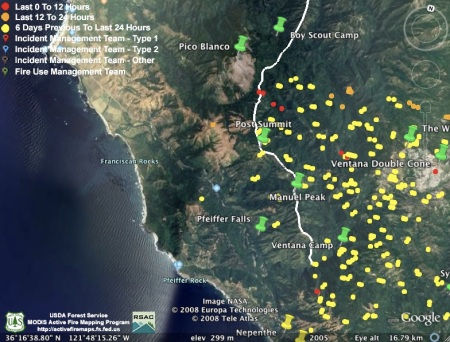 If the fire’s made any big runs today, it’s made them out of sight of the thermal imaging satellites. The only places where MODIS has detected heat within the past 12 hours are on Jackson Creek, in the headwaters of the North Fork Little Sur and on the ridge between the Double Cone and Puerto Suello.

Here’s a current look at the Little Sur basin: 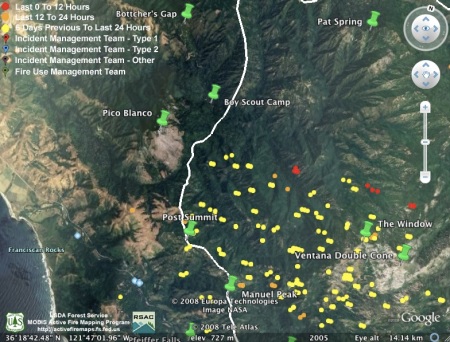 The Forest Service is noting this morning that the fire’s expansion was limited yesterday by higher humidity. They are expecting the marine layer to thin to 1,500 feet today, possibly leading to some increase in fire activity. They say there is “potential for moderate to high spread along the east and south perimeters as a result of the wind shifting to NW.” Here are this morning’s specific predictions (which seem to confirm that fire is backing down the “Golden Stairs”):

East of the Pico Blanco Boy Scout Camp, expect the fire to continue to back down slope into the Jackson Creek & Little Sur River. Should the fire get established in the drainage, it could make a strong run upslope to the north. Between Pico Blanco and Post Summit, the fire will continue to work to the west, backing down the Molera Trail ridge.(emphasis added) In the Manuel Peak area, the fire will continue to work around the east side of the peak to the south while also backing actively down slope into the Big Sur River drainage. The fire along the south end of the North Coast Ridge Road will continue to burn very actively, backing off both sides of the ridge with frequent high intensity uphill runs back up towards the ridge top. The fire will continue backing down the ridge to the west toward Highway 1. Spread rates and fire activity will decrease dramatically as the fire moves below the upper limit of the marine layer.

Maybe we’re reading this wrong somehow, but the reference to the fire backing down the Molera Trail ridge, seems to suggest that firefighters are not attempting to hold the fire inside the Marble Cone and Kirk Complex dozer lines in this location, but are planning to halt its progress somewhere further down the South Fork Little Sur canyon.

Overnight thermal imaging detected heat only on the northern end of the fire. That doesn’t mean the southern and eastern branches of the fire aren’t burning, of course, but it is an indication that their progress has probably slowed. The satellite found heat well down in the Jackson Creek drainage, high on the North Fork Little Sur, and moving down the ridge from the Ventana Double Cone in the direction of Lone Pine Camp and Puerto Suello. It also detected heat about half way down the “Golden Stairs” above Molera – but we’re going to assume this is another glitch unless someone tells us otherwise.

Here’s this morning’s overview (note how the disappearance of week old dots is revealing the extent to which the fires most active northern, southern and eastern sections have burned away from one another): 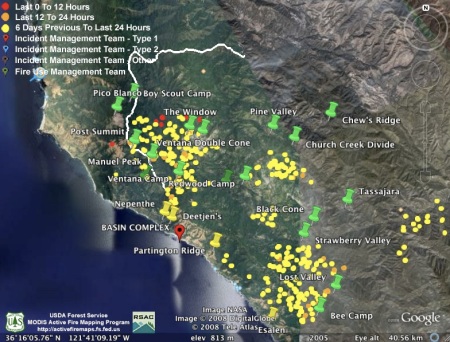 And here’s a closer view of the fire’s active northern edge: 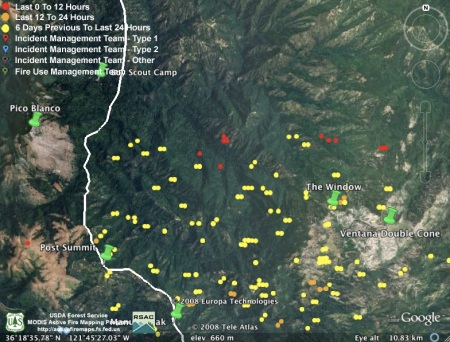