As our friends in the Big Sur valley have seen no sign of fire on the west side of Mt. Manuel we believe that the heat detections (which continue to multiply) in the Juan Higuera drainage – and even on Pfeiffer Ridge -must be in error. This is certainly an unfortunate spot for an error to occur (we’ve been hearing from quite a few people who’ve been following the MODIS data on their own and got pretty concerned when these new detections went up), but we think it’s just another example of the limits of this technology. We’ve seen MODIS fail to notice fire before, but this is the first time we’ve been able to catch it finding fire where we don’t think fire exists. It just underlines the importance of treating everything you read or hear about the fire – no matter how official or high-tech the source – with some healthy skepticism.

Here’s what the latest map shows in the Big Sur Valley (not to be taken seriously): 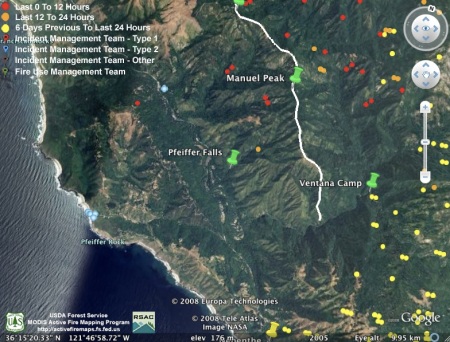 New thermal imaging shows two new hot spots on the Big Sur side of the Mt. Manuel/Post Summit ridge. This time in the Juan Higuera Creek drainage. Are they conducting backfire operations here? Has the fire actually spilled over the dozer line? Is the satellite hallucinating? We have no idea. Maybe someone with a view will be able to fill us in.

Meanwhile, on the northwest edge of the fire, things remain active, but there is no thermal imaging confirmation of the fire moving any closer to the Scout Camp than it was this morning.

It’s on the eastern and southern ends that the fire has really picked up steam since the last data set. The fire is now much further down the Tassajara Creek drainage than before and there is even a hot spot detected over the ridge in the Church Creek watershed. Fire has also been detected almost on the floor of Lost Valley.

There are indeed new hot spots detected in the Dolan Ridge area, but they are all on the Hot Springs Canyon side of the ridge. Whatever is happening across the dozer line in Big Creek has still not been detected by the satellite.

Here’re the new hot spots detected on the Big Sur side of the Manuel/Post Summit ridge: 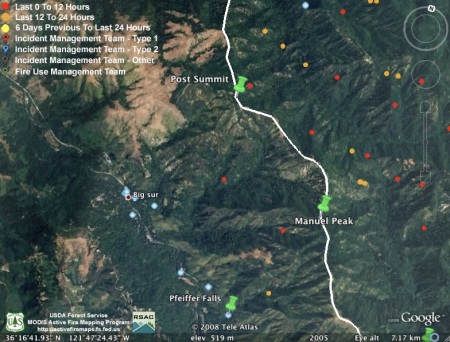 Here’s the latest thermal imaging view of the Tassajara and Church Creek watersheds: 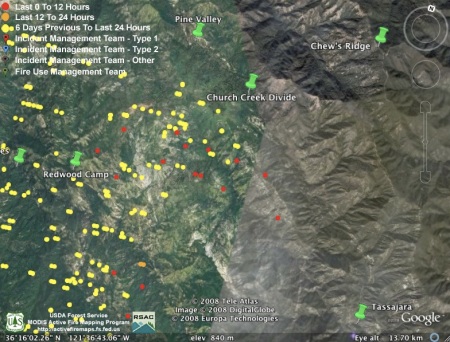 And here’s what the satellite found in the Dolan Ridge and Lost Valley areas:

New thermal imaging data shows continued active burning in the Little Sur watershed. There isn’t any indication that the fire has moved closed to the Boy Scout Camp (which doesn’t mean it hasn’t), but there are new heat detections closer than ever to the “big box” dozer line (drawn in white – by Boon Hughey) near Pico Blanco and the Manuel Peak/Post Summit Ridgeline. The latest pass detected no heat along Pfeiffer Creek, so we are still assuming that was a data glitch of some kind. There is nothing on the map yet to give us any clue as to what is going on in the Dolan Ridge/Big Creek area, but the fire to the east appears to be moving deeper into the Zig Zag Creek drainage – nearly reaching the creek not too far below Strawberry Valley.

Here’s the new view of the northwestern edge of the fire: 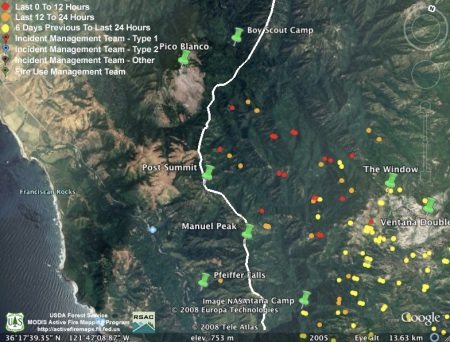 And here’s the southeastern edge getting deeper into the Zig Zag watershed: 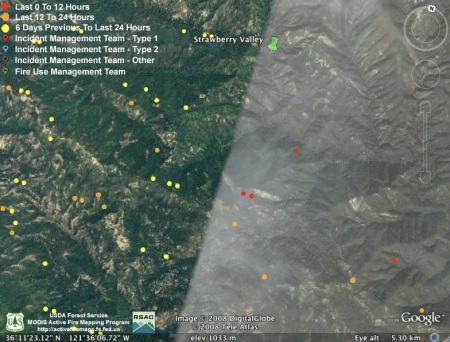 David Bean has written to tell us that the Red Cross says the Pico Blanco Boy Scout Camp is the trigger point for the Palo Colorado evacuation advisory becoming an evacuation order. This morning’s thermal imaging data had the fire beginning to descend toward the camp from Launtz Ridge.

There are reports spreading through the Internet well, like wildfire, that a backfire on the southern end of the fire has gone awry and moved south across Big Creek. We don’t know where these reports originated and don’t know whether they reflect reality or not — but we’re trying to find out. This morning’s official report (issued at 10AM and now available on-line) confirms the advances in the Little Sur Watershed and reports that fire has crossed Dolan Ridge (between the Hot Springs Canyon and Big Creek watersheds) where a dozer line was being constructed. The report says “crews will continue to hold the fire near Dolan Ridge, but are also constructing line along Nacimiento-Fergusson Rd.” The fire that has crossed Dolan Ridge has likely done so high in the watershed (in the vicinity of Bee Camp).

The rapid advance through the Little Sure watershed indicated by this morning’s thermal imaging maps is confirmed by this evacuation advisory (not order) for the Palo Colorado Road area issued at 6:00AM this morning.

If the thermal imaging data is to be believed, the northern end of the fire has become very active – making runs more extensive than we’ve seen in almost a week. Hot spots are now appearing very close to the “big box” dozer containment lines (could they already have started backfire operations?) behind Pico Blanco and the Manuel Peak summit. There is even a heat detection deep in Pfeiffer Creek (upstream from Pfeiffer Falls). Is this a data glitch, or is there really fire now burning on the Big Sur side of the hill? Perhaps someone with a view of this area could let us know. The southern end of the fire also appears to have had a hot Saturday night. It looks like the fire is running southeast along the ridge separating the Higgins Creek and Zig Zag Creek watersheds. On the bright side, there have been no heat detections on the west side of the Coast Ridge during the past 12 hours. Here’s the overview: 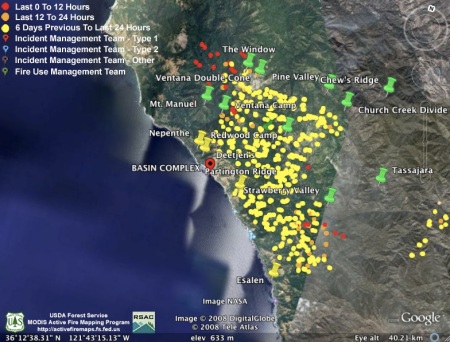 Here’s a closer look at the large area recently traversed by the fire in the north: 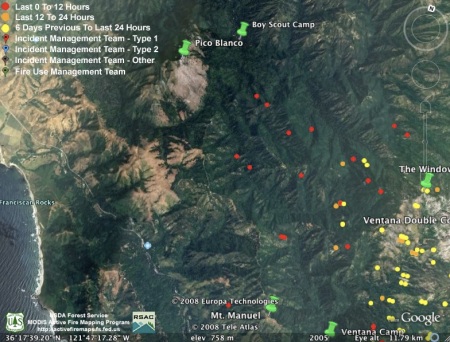 Is there really a fire burning on Pfeiffer Creek? We’re going to assume this is a data glitch until someone with a view of the area tells us differently: 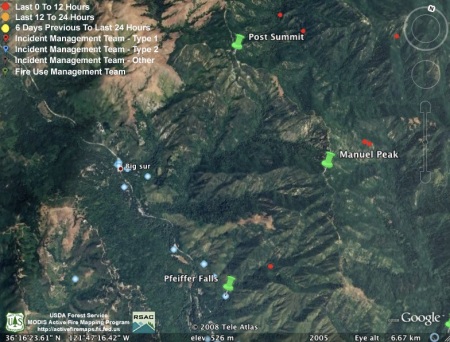 Here’s the latest from the fire’s southern end. The easternmost heat detections are all in the Zig Zag watershed, but almost on top of the ridge: 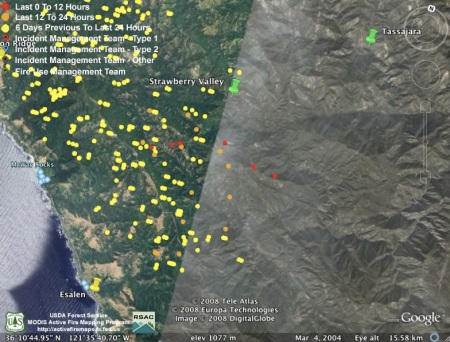