Some photos taken this afternoon: 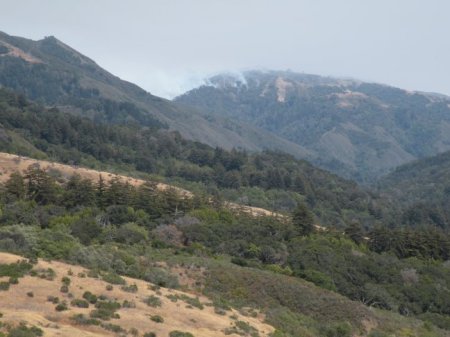 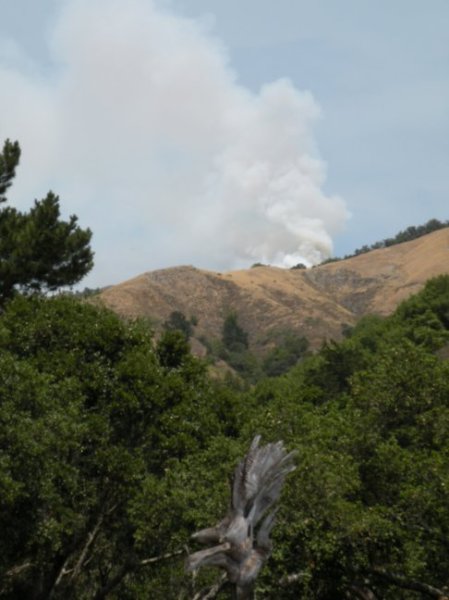 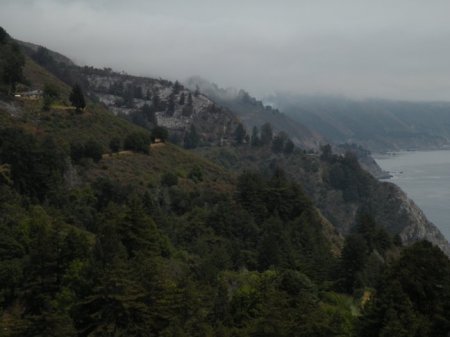 The ash in the burn zone on Grimes Pt. almost looks like snow

The new thermal imaging data shows, like you’d figure, plenty of heat in the Big Sur Gorge upstream of the containment lines and on the back side of Mt. Manuel. We understand flames were visible along the ridge today when viewed from Lighthouse Flats. There are no new heat detections from the end of the fire closest to the Boy Scout Camp, but that is probably because it is backing down into the canyon. KSBW just aired some impressive footage of the fire actively backing down this slope (although they irresponsibly misidentified their vantage point (which was clearly Bottcher’s Gap) as Palo Colorado Canyon. There is no sign of any fire getting over the southern containment line at Dolan Ridge, but the fire is apparently making good progress down Zig Zag and Lost Valley Creeks toward the Arroyo Seco River.

Here’s the current picture of the Big Sur area:

And here’s the southeastern front:

This morning’s official USFS Fire Report is now available on line. It reports over 4,000 acres being burned overnight. It also states that, while fire has been burning in the vicinity of the Mt. Manuel fire line, it has not spilled over and maintains, contrary to the various reports circulating yesterday, that the fire lines at the end of the North Coast Ridge Rd. (i.e. Dolan Ridge) are holding.

The Forest Service is expecting the marine layer to slow fire activity below 2,000 feet today and for winds to be lighter than over the weekend. Here are the specifics on what they expect the fire to do today:

On the northwest perimeter, east of the Pico Blanco Boy Scout Camp, expect the fire to continue to back down slope into the Jackson Ck & Little Sur River.  Should the fire get established in the drainage, it may make a strong run upslope to the north.  In the Manual Peak area, the fire will continue to work around the east side of the peak to the south while also backing actively down slope in to the Big Sur River drainage.  To the south of the Big Sur River, the fire will continue to back in to Bad Gulch, creating the potential for an up slope run. On the south perimeter, the fire along the south end of the North Coast Ridge Road will continue to burn very actively, backing off both side of the ridge with frequent high intensity uphill runs back up towards the ridge top.  As the fire back down the ridge to the west towards Highway 1, spread rates and fire activity will decrease dramatically as the fire move below the upper limit of the marine layer.

MODIS, for the time being anyway, seems to have given up locating random heat detections in the Big Sur valley. We’re glad for that. The only detection over the dozer line this morning is near the top of Post Summit which is, at least, quite close to where we know the fire is burning. There are no fresh heat detections from the end of the fire closest to the Scout Camp, but there appears to be a lot of heat along the fire line from the top of the Coast Ridge down into the Big Sur Gorge. The fire on the Double Cone also appears to have reawakened overnight and MODIS places its leading edge just over the Double Cone trail and into the Carmel River watershed (in the headwaters of Ventana Mesa Creek). There is still no sign of the fire getting closer to Pine Valley or Chew’s Ridge, but MODIS finds continuing fire activity in the upper Tassajara Creek drainage.

On the south and southeastern end of the fire, there appears to be an active front stretching from Dolan Ridge nearly to Strawberry Valley. There is (finally) a heat detection on the south side of Dolan Ridge (high on the ridge above Bee Camp) and there are, for the first time, heat detections to the east of Zig Zag Creek (suggesting the fire is climbing toward the trail on the ridge between Shovel Handle and Camp Creeks and between Camp Creek and Strawberry Valley).

Here’s the overview (Note that these maps are becoming less useful as a way of depicting the overall area burned. The heat detections are deleted after a week, meaning that the dots are now disappearing from the places that burned in the fire’s early days):

Here’s a view of the new heat detections along the fire line from the end of the Coast Ridge down into the Big Sur Gorge: 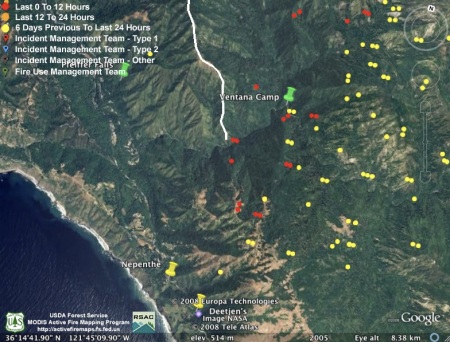 The latest thermal imaging take on the northwest end of the fire: