Janette Moody tells us that “the guys on Apple Pie Ridge” report that as of 9:15PM NO structures have burned there – although they can see lots of fire from there.

Those of you following the thermal imaging data have noticed that this afternoon’s data once again places numerous hot spots in the Big Sur valley way to the west of their actual location (assuming they are bona fide heat detections in the first place). There is no doubt that fire is currently burning an extensive area to the east of Highway One in the Big Sur valley, but as of this time people in the valley are quite sure that the fire has NOT moved west of the Highway. In the interest of not sowing confusion, we’re not even going to post the most recent map.

We will note, though, that it also indicates that fire has quickly descended from Puerto Suello during the day today and is now nearly to Hiding Camp on the Carmel River.

We once again attended the 7:00PM community meeting at Carmel Middle School. It started with the handing out of this evening’s official fire report. We don’t know whether or not this one will ever be posted on the Forest Service website, but it might be a good idea if it isn’t since it contains the statement “The fire continues to move in the Palo Colorado Canyon …” A glaring error (the fire hasn’t even reached any watersheds adjoining Palo Colorado) that could easily cause a lot of unnecessary angst among those whose loved ones live in Palo Colorado. We tried to politely point the error out to the chief information officer, but got the old “we know better than you” look of disgust and a quick brush-off so we doubt they’ll bother to fix it.

The report also stated that the red flag fire warning has been extended through the night and that they anticipate giving Palo Colorado residents 24 hours notice should an evacuation become necessary.

A lot more people were in attendance tonight and they weren’t willing to tolerate the kind of vague waving at the map we had last night. As soon as Incident Commander, Mike Dietrich, began his remarks they began yelling for him to get specific and use the names of the places he was talking about. This led to a much more informative briefing.

Here’s what we learned:

The firefighters have had big success in the south. The spillover into the Big Creek watershed was stopped and the fire is now actually considered to be contained along the upper section of Dolan Ridge and along a section of the Coast Ridge heading south from there to about the middle of the Big Creek drainage. Assuming this containment holds, which Dietrich clearly thinks it will, Big Creek, Lucia and the Hermitage are all probably out of danger. What a change from the story we heard yesterday!

They will continue burn out operations along the lower Dolan Ridge line all the way to the Highway and hope to have the fire contained along that section soon, as well.

The fire is also considered contained along Highway One from “just south of Ventana almost to Partington Ridge.” This brings total containment of the fire up to 5%.

In the Ventana area, Dietrich confirmed the loss of two homes immediately above Ventana. He could not confirm the third because firefighters have not actually visited the site yet. They are hopeful that they will be able to stop the fire tonight along Post Creek (which runs from Ventana down to the State Park Campground).

In the center of the Big Sur valley they are still dealing with fire creeping down the hill from the east. Dietrich did not confirm, or even mention, the loss of a home on Apple Pie Ridge (a particularly persistent rumor throughout the day today).

In the Pico Blanco area the fire is moving slowly and they are hoping to have the time to finish prepping the Mescal Ridge dozer line, treat it with fire retardant, and set backfires from it before the fire arrives. Dietrich commented that the fire continues to move very slowly in the Scout Camp area, but that it is a very difficult area in which to fight fire due to fuel loads and terrain. He also stated that they expected the fire along the North Fork Little Sur to move north into the Pine Creek drainage. We’re going to assume he meant Skinner Creek or Comings Creek, since Pine Creek would mean he expects the fire to jump the northern Big Box dozer line (and we’re pretty sure that’s not part of his plan!).

This morning’s 8:00AM official fire report has finally been posted to the Forest Service site. It reveals that a red flag fire warning has been issued for today and tonight, due to heat, low humidity and wind, and that extreme fire behavior is expected.

The latest satellite pass didn’t detect many hot spots and found none that extend the boundaries of the fire into new territory. This certainly doesn’t mean that the fire has stopped, but it is an indication that the fire (at least when the satellite went by) wasn’t burning as aggressively. Here’s the latest map of the northwest end:

And here’s the southern front:

The latest from Inciweb, which actually seems to be working today:

Significant Events: West Zone: Offshore winds have caused the fire to make a substantial advance along the coast towards BIG SUR. The fire spotted across numerous locations from Ventana Inn north to Manual Peak and burned actively down slope through the night. This is causing major control problems in protecting the BIG SUR community. A mandatory evacuation and road closure has been put in effect for the entire community of BIG SUR and both sides of Hwy 1 from Lime Kiln State Park north to Palo Colorado Raod. A Red Cross evacuation center has been opened at Carmel Valley Middle School located at 4380 Carmel Valley Road in Carmel Valley (831-624-6921). The evacuation in BIG SUR has displaced 1500 residents and effected 500 homes and 20 businesses. An evacuation advisory remains in place for residents of the Palo Colorado Canyon from Hwy 1 to the Pico Blanco Boy Scout Camp. Evacuations remain in place in the Partington Ridge area. East Zone: Continue structure preparation on Carmel Valley Road and Cachagua areas.

Reliable news remains hard to come by. The Forest Service hasn’t even posted last night’s report to the Los Padres Current Conditions website, much less this morning’s. Meanwhile, we’ve heard a heartwarming tale of Apple Pie Ridge residents working through the night and saving their homes and some less happy tales – none of which can be confirmed. We just hope that all of you are safe.

Mark Sullivan, at Post Ranch, wrote us at 3:39 this morning with the sad news that the three homes above Ventana have burned. The new themal imaging data (the placement of the dots is not precisely accurate, remember) also puts the fire well down into the Ventana area – as well as bringing it to the Highway at the intersection with the Old Coast Rd. by Molera. No new heat detections were found on the south end of the fire (which certainly doesn’t mean it won’t be burning strongly again today), but the satellite did detect fire still backing down Hot Springs Canyon. Here’s the overview: 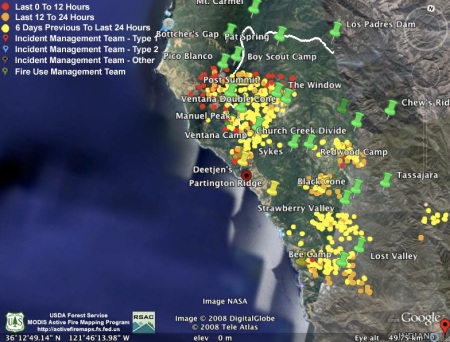 Here’s what MODIS makes of the situation around Ventana. Remember that the placement of the dots is not precise:

This map shows the fire descending from Mt. Manuel into the Big Sur valley: 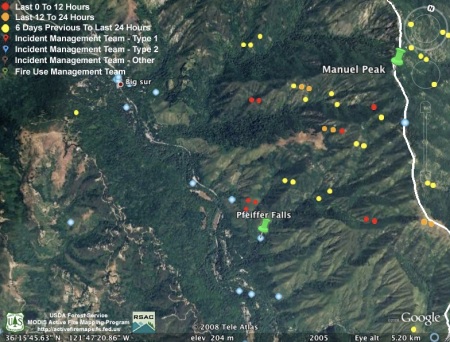 An extensive expansion of the fire is depicted in the Molera area and around Pico Blanco. Just as we feared, it appears the fire is now backing toward the Scout Camp from Pico Blanco (on the wrong side of the Big Box fire line):

This is the fire along the North Fork Little Sur. The map indicates that it is continuing to expand its presence north of the river:

And, finally, here is the fire in the bottom of the Puerto Suello saddle and moving into the Carmel River watershed over what looks like a pretty broad front: