Bear Turns up in Pacific Grove 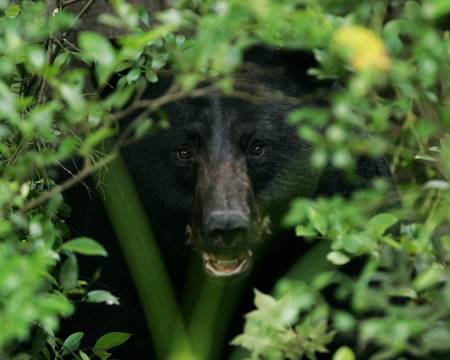 Another bear, or possibly the same bear that was spotted in Robinson Canyon a couple of weeks ago (the size appears to be similar), turned up in Pacific Grove today.

The cops chased it into Monterey,* where it was eventually tranquilized and “removed.” No word on where it’s been renditioned to, but hopefully it has been released back into the Ventana Wilderness from which it doubtless came.

Bears tend to wander beyond the limits of their usual territories at this time of year in search of mates and the vast majority of bear sightings on the Monterey Peninsula and in the Salinas Valley happen in May and June. See this post for more details.

See the Cedar Street Times Facebook page for a pic of today’s bear.

Update: The Monterey County Weekly has published additional details, including the bear being sighted at Pt. Lobos on Thursday and Friday and the fact that it was released into the Los Padres National Forest.

* Local police sources inform us that the Monterey and Pacific Grove police have a long history of passing off animal problems on one another. A favorite in days gone by was to pick up road kill cats and drop them off in the neighboring city. No telling how many times some “flat cats,” as the police called them, were traded back and forth. Driving a live bear across city lines, on the other hand, ups the ante considerably.

This entry was posted on Sunday, June 14th, 2015 at 7:44 pm and is filed under Santa Lucias. You can follow any responses to this entry through the RSS 2.0 feed. You can leave a response, or trackback from your own site.

4 Responses to Bear Turns up in Pacific Grove