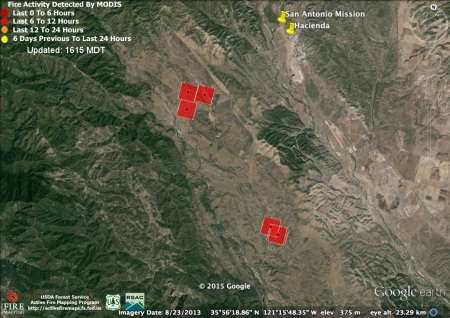 Presumably as a result of yesterday’s lightning, there is at least one fire, dubbed the Peanut Fire, now burning at Ft. Hunter Liggett. The fire is said to be in the Stony Valley area, along the Nacimiento-Fergusson Rd. That would correspond with the upper three heat detections shown above. No telling whether the lower detections are a separate fire or not.

In any case, about 700 acres had apparently burned as of noon today and they may be planning to do some pretty extensive burn out operations, bringing total acreage up to something like 3,000 acres.

While most of this area burned last year, that isn’t likely to slow things down as Stony Valley is mainly grassland. On the other hand, this area burns a lot and fires here have never escaped into the nearby Wilderness or reached inhabited areas. In the absence of any information to the contrary, it would probably be safe to assume that the portion of the Nacimiento-Fergusson Rd. on the fort is closed. 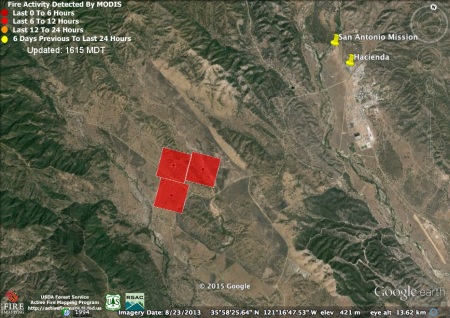 Close-up of heat detections, showing their proximity to the Nacimiento-Fergusson Rd.

June 12 2015 Update: Reportedly 2,500 acres and 80% contained. Full containment expected by this evening. Like last June’s larger Stony Valley Fire, the Peanut Fire was apparently started by Army activity, rather than by lightning.

This entry was posted on Thursday, June 11th, 2015 at 3:40 pm and is filed under Big Sur, Fire, Santa Lucias. You can follow any responses to this entry through the RSS 2.0 feed. You can leave a response, or trackback from your own site.