A wildfire broke out a little after three this afternoon in Stony Valley on Ft. Hunter Liggett, likely as a result of military activity in the area. By 4:30 a large smoke column was visible from much of the Salinas Valley, and the fire has now reportedly grown to 2,500 acres. There is still zero containment.

Stony Valley lies between the Nacimiento and San Antonio Rivers and is crossed by the Nacimiento-Fergusson Rd., which is closed due to the fire. Flames have been visible from Lockwood this evening, suggesting that the fire is not limited to the grassy floor of Stony Valley, but has moved up into the brushier surrounding hills. Hopefully, this will not prevent the coordinated military, Forest Service, and Cal Fire response now under way from getting a handle on it tomorrow. 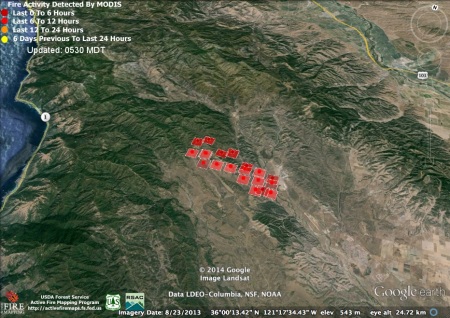 Here’s an overview that gives a good sense of this fire’s scale.

A closer look. The light red heat detections are from around 11:00 last night, the darker red from around 3:00 this morning. Remember that the squares depict the expected margin of error of the detection. Just because something is within a square does not mean it has burned. What these detections suggest is that an active fire front was bumping Nacimiento-Fergusson and Mission roads near base headquarters early this morning, while an even larger fire front was burning north into increasingly rugged terrain to the west of Del Venturi Rd.

100% contained as of 10:30 this morning. Weather cooperated with much cooler temperatures, almost no wind, and much higher humidity this morning, allowing firefighters to get it knocked down quickly. A great job and big thanks to everyone on the fire line. We would have hated to see this burn on into the upper San Antonio watershed.

Ft. Hunter Liggett says Nacimiento-Fergusson Rd. will reopen “in the next couple of days.” The press release says nothing about Del Venturi Rd., but it is probably safe to assume that there is no access across the fort to the Wagon Cave or The Indians at this time (and possibly not until after the weekend).

Heat detections from an 11:18 satellite pass, about 45 minutes after the fire was declared contained, found active fire in only two areas (the dark red squares). Since then, fire activity has markedly increased as temperatures in the fire area have gone up from 58 to 95 degrees, relative humidity has dropped from 38% to 8%, and wind has picked up from almost dead calm to 5 mph with 15 mph gusts. A large column of smoke is currently rising, presumably from burning well inside the containment lines.

This entry was posted on Thursday, June 19th, 2014 at 11:39 pm and is filed under Fire, Flood & Apocalypse, Santa Lucias. You can follow any responses to this entry through the RSS 2.0 feed. You can leave a response, or trackback from your own site.