A swell that peaked at 30 feet last night combined with a 6.5 foot high tide to bring ground-shaking waves ashore on Carmel Point this morning. 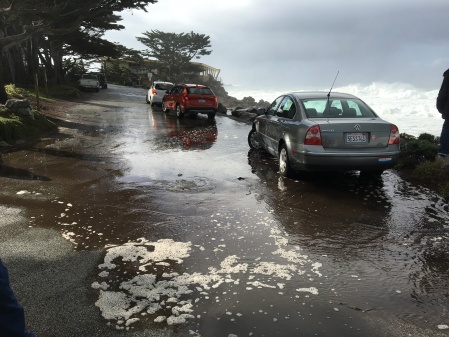 Drivers line up for a salt water car wash, as waves sweep the road.

It may be December already, but this is the very cliff and wave – directly in front of the Tor House – that Robinson Jeffers wrote about in his poem November Surf:

Some lucky day each November great waves awake
and are drawn
Like smoking mountains bright from the west
And come and cover the cliff with white violent cleanness:
then suddenly
The old granite forgets half a year’s filth:
The orange-peel, egg-shells, papers, pieces of clothing,
the clots
Of dung in corners of the rock, and used
Sheaths that make light love safe in the evenings: all
the droppings of the summer
Idlers washed off in a winter ecstasy:
I think this cumbered continent envies its cliff then….
But all seasons
The earth, in her childlike prophetic sleep,
Keeps dreaming of the bath of a storm that prepares up
the long coast
Of the future to scour more than her sea-lines:
The cities gone down, the people fewer and the hawks
more numerous,
The rivers mouth to source pure; when the two-footed
Mammal, being someways one of the nobler animals, regains
The dignity of room, the value of rareness.

Jeffers, as was his custom, said pretty much all there is to say about it with that one.

This entry was posted on Friday, December 11th, 2015 at 1:17 pm and is filed under Coastal Development/Erosion, Fire, Flood & Apocalypse. You can follow any responses to this entry through the RSS 2.0 feed. You can leave a response, or trackback from your own site.

One Response to November Surf in December