Then reaches an open terrace where wild turkeys roam.

But the real climbing (20% with sections up to 30%) begins when the trail hits the chaparral.

The silver lupine is a world of its own. This flower stalk belongs to the bordered plant bugs (presumably Largus californicus).

But a bright green blister beetle eating the guts out of a beheaded lady bird beetle is clearly the boss of this stalk. There are over 7,000 species of blister beetles, but this one (which is probably Lytta chloris) very closely resembles Lytta vesicatoria, the infamous Spanish fly “aphrodisiac.” Dried and powdered, these beetles contain about 5% cantharidin, a powerful toxin. Taken in extremely small doses, this powder can irritate urethral passages and may cause priapism in men – a kind of poor man’s Viagra. But take just a bit too much and the cantharidin can be fatal. Even handling these beetles can result in painful blisters – hence the name.

The trail reaches the top of the East Molera Ridge near groves of oak and redwood.

Checker bloom (Sidalcea malviflora) growing in the grasslands on top of the East Molera Ridge. 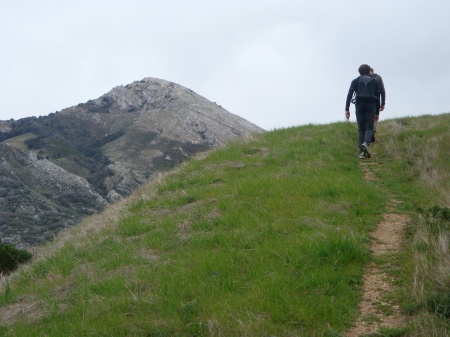 Pico Blanco, on the far side of the Little Sur River, is a constant companion on the way up the ridge. 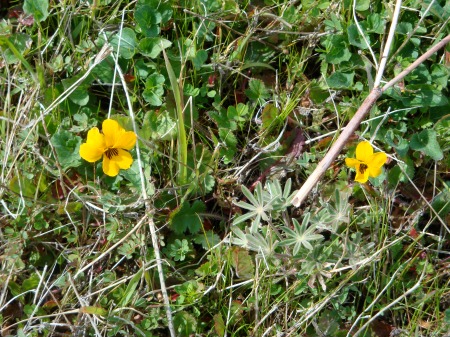 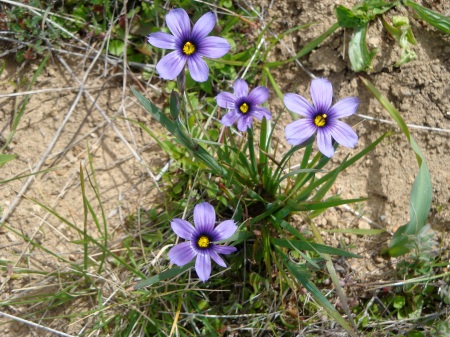 A bush poppy (Dendromecon rigida) and the South Coast. 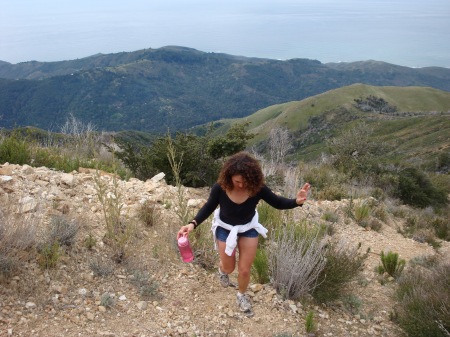 Loose gravel on the final ascent to Post Summit can make balance tricky. 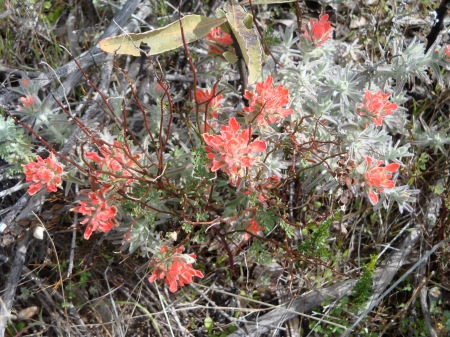 Indian paintbrush (looks like Castilleja foliolosa to us) growing near the top.

The final scramble. With grassy East Molera Ridge and Pt. Sur in the background.

View of the backcountry from Post Summit. How many peaks do you recognize?

Looking to the south from Post Summit. Cabezo Prieto is the next high point along the ridge and Mt. Manuel is the lower summit after that. Cone Peak and other notable high points in the blue distance.

Heading down through grassy rollers. And, yes, we were safely ensconced at the Maiden Publick House long before the rain began to fall.

See our previous post,  A look at the Uplands of the Proposed Molera Wilderness, for scenes and flowers off the beaten path.

This entry was posted on Sunday, March 13th, 2011 at 6:50 pm and is filed under Big Sur, Insects, On Foot, Plants, Santa Lucias, Wildflowers. You can follow any responses to this entry through the RSS 2.0 feed. You can leave a response, or trackback from your own site.