As everyone knows, a gigantic, illegal-campfire-caused wildfire is currently burning in Big Sur. It has already burned over 80,000 acres, destroyed nearly 60 homes, and led to the death of a firefighter. It isn’t expected to be contained, much less out, until the end of September.

You might think this reality – impossible for anyone living in, or visiting, Big Sur to ignore – would cause people to seriously think twice before building illegal fires of their own.

Tourists are still lighting fires along the coast on a nightly basis. Many, in places that directly threaten homes and portions of the backcountry (like the Silver Peak Wilderness) the current fire is expected to spare.

Notice how it was not put out with water, but allowed to slowly die out on its own. The unburned ends of sticks, which must have smoldered for quite awhile, remain around the edges and dry bay leaves that fell onto the still-hot coals were partially burned and scorched. It’s purely good luck that the wind didn’t fan those leaves into flame and blow them into the surrounding brush.

Here’s another, only hours old, that was also left to its own devices. This one includes partially burned garbage and toilet paper. Nice!

And, speaking of toilet paper, here’s the start of a popular coastal trail in Pacific Valley. Let there be no doubt that more restroom facilities are needed along the coast. Just around the bend a group of tourists were smoking cigarettes while enjoying the view. It’s unfortunately common to see people smoking while walking through tinder dry brush on these trails. 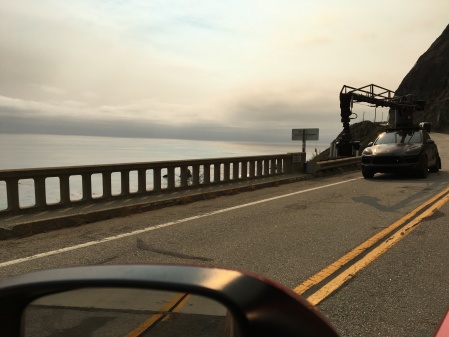 Law enforcement, whether rangers, deputies, or CHP, tends to be sparse on the South Coast, but there were plenty of CHP officers available yesterday when it came to shutting down the Highway so this camera rig could film a sports car driving through the rock shed. Too bad patrolling for illegal fires isn’t as high a priority. 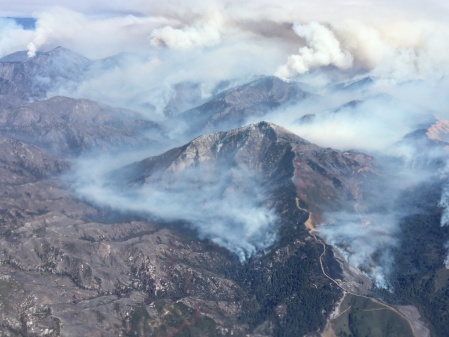 “What harm could there be in having a little campfire?”

This entry was posted on Saturday, August 20th, 2016 at 1:27 pm and is filed under Uncategorized. You can follow any responses to this entry through the RSS 2.0 feed. You can leave a response, or trackback from your own site.