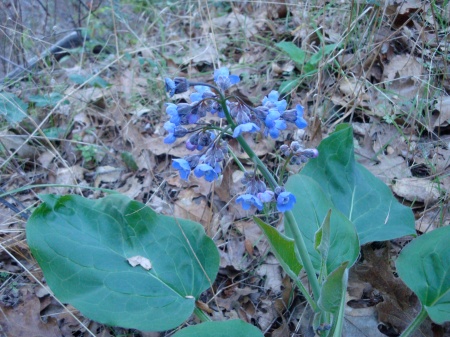 While the authorities nearly all agree that these big stalks of striking blue flowers shouldn’t start appearing until at least March, we’ve been seeing them in bloom just about everywhere we’ve been since January – making C. grande a natural pick for Wildflower of the Week. The Hound’s Tongues are members of the Borage Family (the Boraginaceae) and there are dozens of Cynoglossum species worldwide. C. grande, however, grows only west of the Cascades and Sierra from British Columbia down to our own Santa Lucias, where it reaches its southernmost outpost in northern San Luis Obispo County (the Sierra foothills population reaches its southernmost limit at approximately the same latitude in Tulare County). Look for C. grande in well-drained shady spots, particularly on north slopes. Other local wildflowers that reside in the Boraginaceae include popcorn flowers and fiddlenecks.

The authorities are also close to unanimous in stating that the Hound’s Tongues gained their name from the shape of their leaves. Wikipedia, that ever-reliable font of information, disagrees however, insisting instead that the name was bestowed due to a folk belief that putting a Cynoglossum leaf in your shoe prevents dog attacks. We wouldn’t rely on that.

A closely related European species, C. officinale (Common Hound’s Tongue), was introduced to the United States in the 1800’s and due to toxicity to livestock, burs that tangle in the coats of sheep, and a propensity for massively colonizing disturbed areas, is widely reviled as a noxious weed. C. officinale is now well-established in much of the country, although not in our area. C. grande, fortunately, seems far less inclined to aggressively expand its range, preferring, like many Xasáuan Today readers, to reside alone or in small discreet groups, deep in the undisturbed woods.

While C. grande’s leaves are reputedly toxic and, like most of the Boraginaceae, contain carcinogenic alkaloids, its large tap root was apparently used by some Native cultures in the preparation of treatments for burns and other ailments. Places we’ve recently seen it blooming include Blue Rock Ridge, the South Fork Little Sur, and Skinner Ridge.

This entry was posted on Saturday, February 25th, 2012 at 3:19 pm and is filed under Big Sur, Plants, Santa Lucias, Wildflowers. You can follow any responses to this entry through the RSS 2.0 feed. You can leave a response, or trackback from your own site.

3 Responses to Wildflower of the Week: Pacific Hound’s Tongue