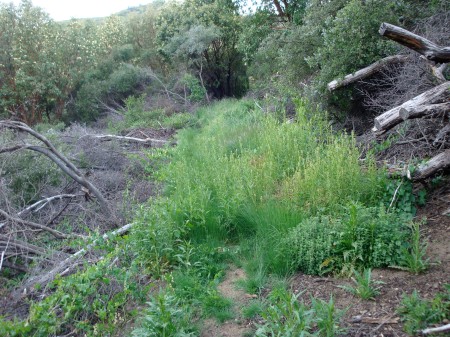 With the exception of an overgrown patch or two, like this one, the Ventana Double Cone Trail is in pretty good shape as it leaves Bottcher’s Gap and climbs Skinner Ridge. Poison oak is infringing on the trail in a number of places, but can still be avoided (for now, anyway) by those who keep their eyes open. A few drops of rain were falling, but the blooming Douglas Iris along the first half-mile of trail was beautiful. All encroaching brush and trees have recently been cut back along this stretch. 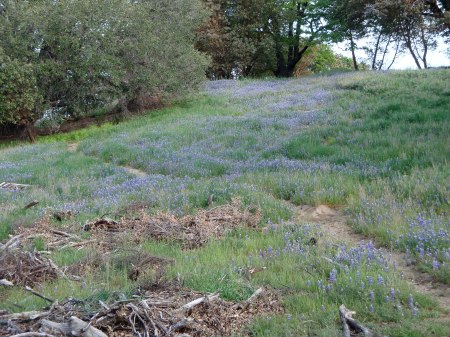 Lupine blooms in the fire break on top of Skinner Ridge. The reworked trail is in great shape. 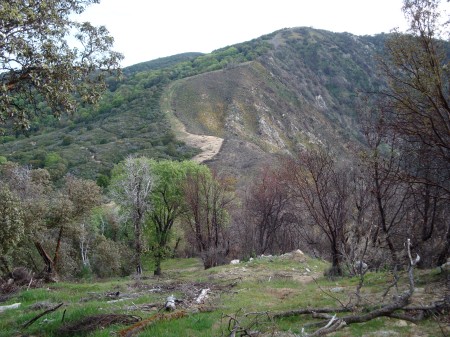 The fire break descends from Skinner Ridge and ascends Devil’s Peak. Unfortunately, most travelers are likely to ignore the well graded switchbacks that descend to the saddle and simply charge straight down the fire break.

Well scorched view down Skinner Creek from the saddle between Skinner Ridge and Devil’s Peak. 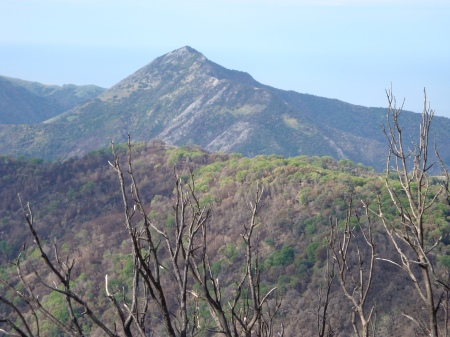 Pico Blanco from the slopes of Devil’s Peak. 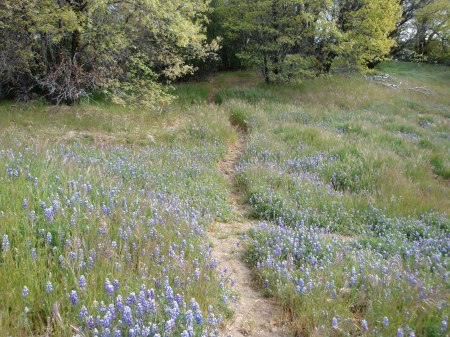 The devil is in the details! On top of Devil’s peak, the crew has reworked the trail to lead travelers straight onto the trail to Mt. Carmel. To continue on the Ventana Double Cone trail you must now make an unsigned hard right onto something that barely looks like a trail at all. To make matters worse, there are at least 3 day-glo ribbons beckoning from the Mt. Carmel trail. Anyone who takes the bait will find that the trail work abruptly ends about 50 feet further along. Without a doubt this is going to leave those who aren’t sure about where they’re going wandering off in the wrong direction.

Whether you make the correct turn or not, the top of Devil’s Peak is where the recent trail work ends. After leaving the summit, the trail quickly vanishes into waist-high grass. If you know where to look, it’s possible to find the sections of trail that descend through the woods on the north side of the ridge. If you don’t know where to look, you’ll be pushing through this grass for pretty much the whole descent. This is the problem with excluding the public from the Wilderness. Unused trails quickly vanish! 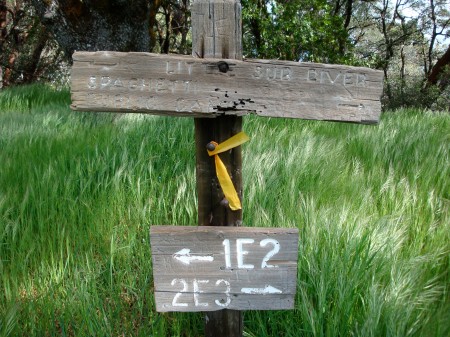 Beyond Comings Gap one must continue pushing through the deep grass along the fire break. The job isn’t made any easier by the hidden logs and sticks pulled into the fire break as part of the rehabilitation effort. Just past this slash pile and helipad one can finally pick up the trace of the trail heading out along the hillside to the right.

And when we say trace, we mean trace. Unless you are very familiar with this trail or very good at following “minimalist” trails, you will likely have some difficulties with this one. 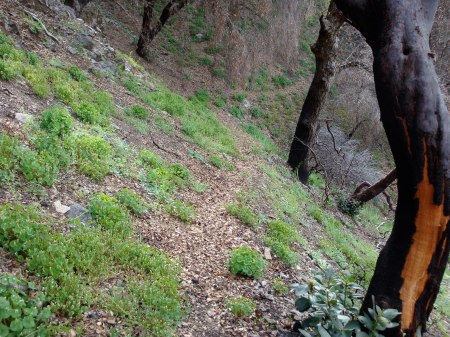 Where the trail passes through the woods it usually becomes easier to follow.

The air is heavy with the scent of lupine. 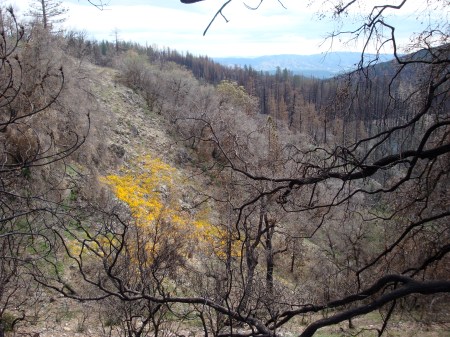 An absolute inferno burned through the saddle just above Spaghetti Camp; at the headwaters of Danish Creek.

This pine forest came through Marble Cone relatively unscathed and the Kirk Complex Fire never got to it, but not a single pine has been left alive here this time. There don’t even appear to be any pines sprouting (here or anywhere else). 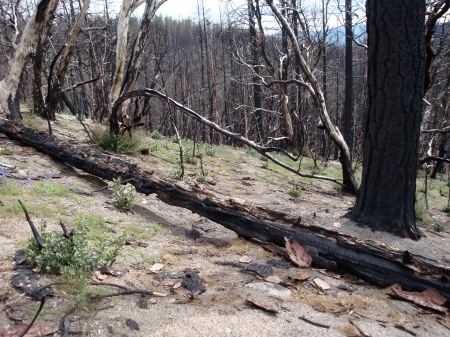 The trail is faint and a bit of an obstacle course. 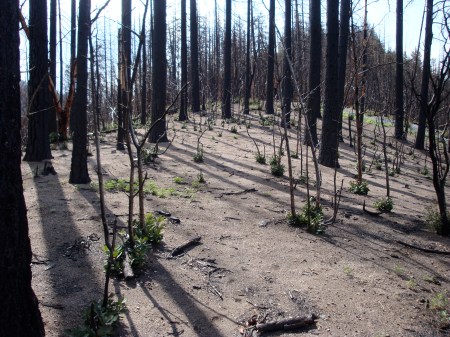 The oaks and madroños are sprouting from the roots, but the pines are stone dead.

A large pine across the trail.

The closer one gets to Pat Spring, the more obstructed the trail becomes. 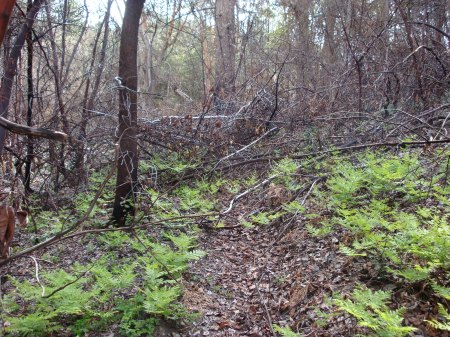 Scorched and snow-flattened madroño make the final approach to Pat Spring a chore. 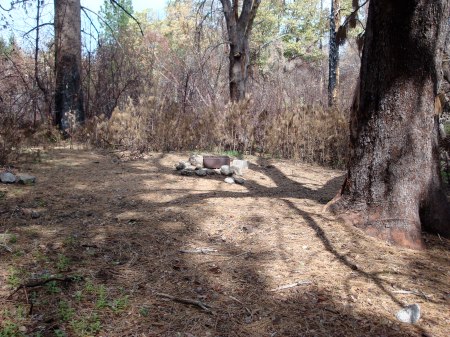 One of the main Pat Spring campsites. Note the thicket of young (and now dead) pines. The mature pines around Pat Spring mostly survived the fire (although, judging from past experience, many have likely been weakened and will die in the next few years), but the younger pines did not — and there is no sign of pines sprouting from seed. 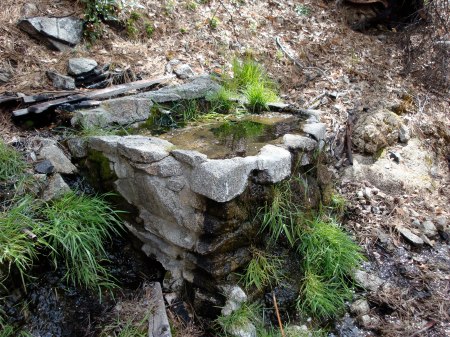 Pat Spring: Takes a lickin’ and keeps on tickin’. 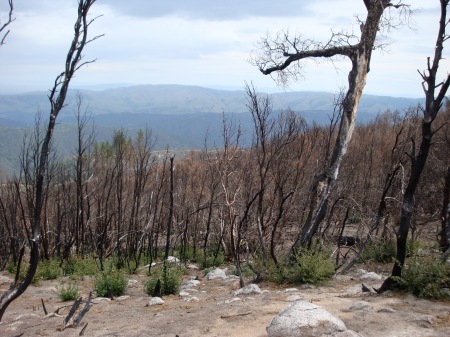 Cachagua and the Sierra de Salinas from the hill above Pat Spring. The fire break along Blue Rock Ridge is visible just above the tree line. The trail up the hill from Pat Spring isn’t too difficult to follow, but it becomes quite sketchy and obstructed as it reaches the top of the ridge.

The trail crosses the ridge and disappears into fields of flowers.

There is no way to adequately describe what it is like to wander through these fields and photos cannot do them justice.

Lupine, poppies and owls clover predominate, but dozens of other flowers are scattered throughout. It’s visual and olfactory overload. 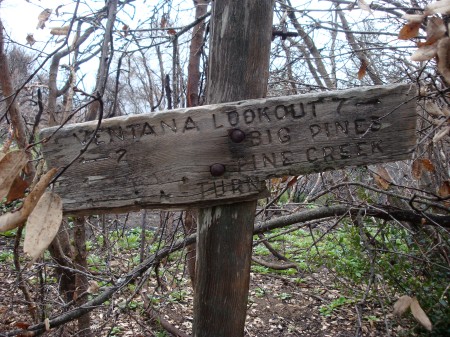 Well, if there’s a sign here, this must still be the trail. As the trail approaches Little Pines it becomes very sketchy indeed, especially whenever it hits the ridge top – but there are also some side-hill sections where every trace has disappeared. Anyone in a hurry would be well advised to go somewhere else. 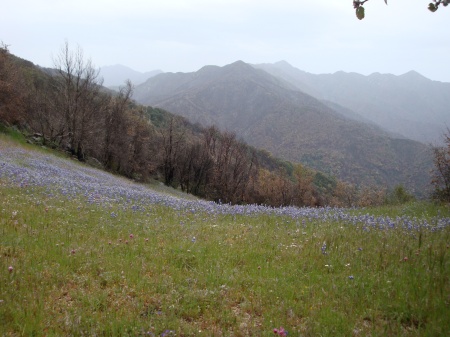 The turn-around point. Past Little Pines, the trail gets even worse. Scrub oak that was encroaching on the trail before the fire is still encroaching; only now it’s dead and fire-hardened. To go further through this gauntlet would require a switch to long pants, but the rain was getting harder and who wants to wear long pants in the rain?

The day was getting darker, wetter and windier.

Taking pictures in the rain has already destroyed one camera this winter, but sometimes it’s hard to resist.

The poppies fold up their petals as a serious wind begins to blow.

That’s the way home! The camera got double-bagged in plastic at this point, and a good thing too.

The wind howling through the pines at Pat Springs was like something from another world and, a few minutes later, the real “shock and awe” rain began. It would have been nice to bring back some video of the clouds and rain speeding upslope out of the Little Sur basin and whipping through the blackened pines in the saddle above Spaghetti Camp, but there was no way to do it without ruining the camera. You’ll just have to go on a stormy day sometime and see it for yourself.

The high grass on Devil’s Peak was being flattened by the wind and rain, but it was still deep enough that tromping through it was like post-holing through snow (would it have been easier on skis?). It was also wet enough that it felt like a stream crossing the whole way up. The power of the wind and rain on the upper slopes of Devil’s Peak was incredible, but both died down on the descent to Bottcher’s Gap.

This entry was posted on Friday, May 1st, 2009 at 11:16 pm and is filed under Big Sur, Fire, Flood & Apocalypse, On Foot, Plants, Santa Lucias, Wildflowers. You can follow any responses to this entry through the RSS 2.0 feed. You can leave a response, or trackback from your own site.