So just how hot did the fire burn? And where did it burn? Burned Area Emergency Response (BAER) Team maps are beginning to filter out that provide some clues:

Here’s a Google Earth overlay version giving an overview of the Basin Fire. As you might expect, red indicates an intense burn, yellow a moderate burn and green a low burn.

This overview of the Indians Fire shows that it’s average intensity was a good deal higher. Most likely because the weather was so much hotter and drier during most of the time it was burning.

This close-up shows the heavy burning on the ridges surrounding Tassajara. 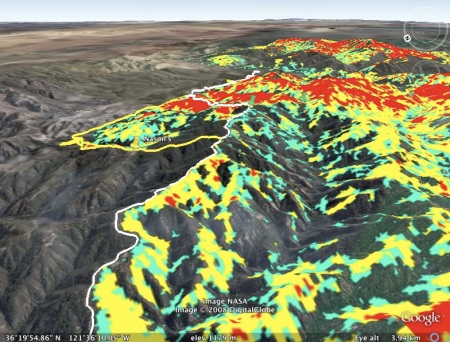 The Miller Fork, by contrast, appears to have gotten off pretty lightly.

Along the North Fork Little Sur, the fire had difficulty burning at all in the deep, marine layer protected canyon, but often burned ferociously on the ridge tops. 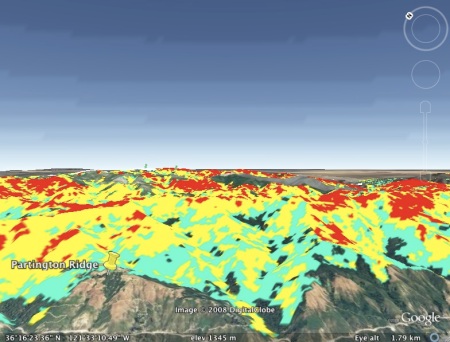 A view of Partington Canyon.

A view of Esalen

Here’s what it looks like in more traditional map format (click map for larger version that can be zoomed in on and explored).

This entry was posted on Thursday, August 28th, 2008 at 1:22 pm and is filed under Fire, Flood & Apocalypse, Santa Lucias. You can follow any responses to this entry through the RSS 2.0 feed. You can leave a response, or trackback from your own site.