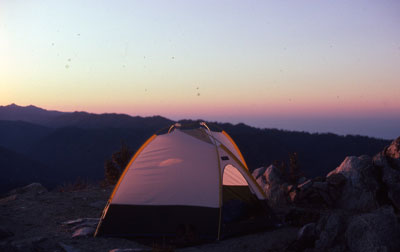 We don’t have any photos of Lone Pine Camp since we’ve never camped there, but here’s a shot of the early morning light striking a tent on the summit of the nearby Double Cone

The last official camp along the Ventana Double Cone trail, Lone Pine Camp (at nearly 4,000 ft.) lies less than 2 miles from the Double Cone summit. It’s been years since we’ve heard of anyone actually camping there and we have no idea what condition the camp may be in or how much brush you might have to break through to get to it, but we’re betting you’ll have it to yourself.

The camp is almost 13 miles from Bottcher’s Gap.